L.Torres, RN
12:40 PM
Tuberculosis is one of the most common and lethal infectious disease around the globe. It is thought that one third of the world's population is infected by the Mycobacterium Tuberculosis---its causative agent. According to World Health Organization, most death cases occur in developing countries due to compromised immunity. The risk of contracting this disease is highest for those who have HIV because people with that disease have compromised immune system. {Sidenote: Lately, HIV cases here in the Philippines had soared its way up to 587%, which is kind of, scary.} 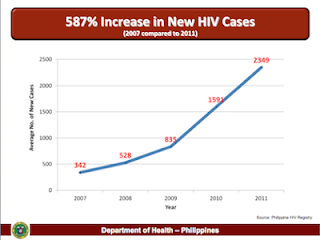 Tuberculosis has a triad of symptoms namely: weight loss, low grade fever (at night) and chronic cough. When do we say that a cough is already a chronic one you ask? A cough lasting for more than eight weeks is considered chronic and I suggest that, in that case, you should consult a doctor immediately! If you experience the above triad of symptoms, don't panic right away. It doesn't always mean that you have tuberculosis.

There is a diagnostic test that we can actually do to determine if you've been exposed to the M. Tuberculosis. It's called Mantoux test/ tuberculin test/ PPD test. It is done by injecting (yes it hurts!) 0.1ml of the Purified Protein Derivative into the layers of your skin, preferably on the forearm. Result is read 48-72 hours after the injection.

There would be a reaction if you've been exposed to the bacteria. It's called an induration---a raised, palpable, hardened area. Take note that the area of redness is not measured.

When I was still working in the Rural Health Unit, my superior taught me how to measure the induration. It can be done by running a ballpen near the site of injection. You will feel a "bump" if there is an induration. (The pen magically stops!) You have to do it on four sides of the injection site. And when you're done, draw a square for easier measurement. I don't know if it affects the reading, what do you think? See picture below:

You have to measure the square. If you get a reading of more than 10mm, it's positive. However, for a more detailed explanation, I copied the ff from wikipedia:


Having a positive result doesn't mean you have Tuberculosis. It only means that you've been exposed to the bacteria. You can have your chest x-ray taken or go do the confirmatory test for Tuberculosis---which is called Sputum AFB(Acid Fast Bacilli).

People in the medical field (ahem!) are more likely to have a positive PPD reading as they are frequently exposed to patients who are carrying that bacteria. It is best to always wear a mask and take good care of your immune system to avoid getting the TB.

SideNote: I still believe that my PPD reading was false-positive because we fooled around my injection site when it got red. See how I developed a bruise on the site? lol. My chest x-ray was clear! :)

Tuberculosis can be cured, if diagnosed early. The Philippine government has this program called TB DOTS (Direct Observed Treatment Shortcourse). They give free medicines and monitor the patient's progress through the help of RHUs. It is just sad that people are scared to be tested because of the stigma that surrounds this disease.

Piece of unsolicited advice: "Prevention is STILL better than cure. So, if you suspect somebody, or you know somebody who has TB, persuade him/her to get tested and of course, treated. We do not want to spread the disease, do we?"